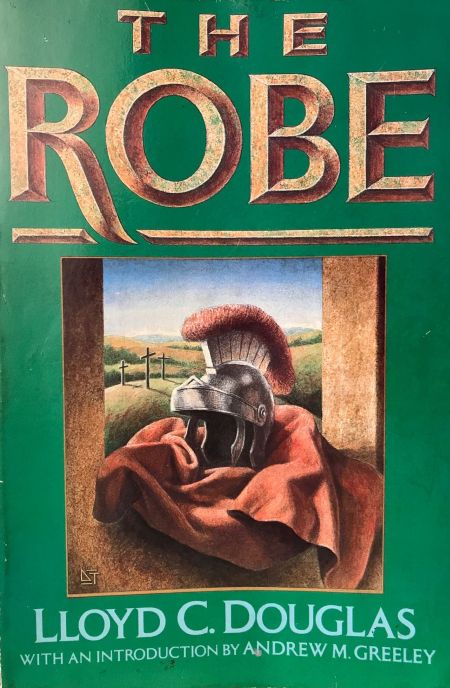 Lloyd C. Douglas's "The Robe" is one of three prominent novels set in the context of the Roman Empire and the time of Christ. The other two are "Quo Vadis?" (Henryk Sienckiewicz) and Lew Wallace's "Ben-Hur." All three stories are perhaps most well-known today through film adaptations, although all three are well worth the time and effort to read. "The Robe" is typical of the three principle novels in this genre, by bringing to life, through fiction, the effects of Christ's ministry through influences on early Christian believers. Fictional dialogue and events are woven into narratives that are reported in the gospels, which makes the storyline somewhat familiar and particularly interesting to Christian readers acquainted with the Bible.

"The Robe" is woven around two central characters- the Roman centurion Marcellus, who is given charge of the crucifixion of Jesus, and his slave Demetrius, a Greek in the service of Marcellus and the Gallio family, headed by a Roman senator. Throughout the novel, Marcellus and Demetrius are as much friends as master and slave (a notable departure from the film version). Indeed, Douglas's story is almost as much about Demetrius as about Marcellus. Marcellus is, while a somewhat dissolute young tribune, presented as a fundamentally decent man with a sense of justice and a caustic view of the Empire and its operations. This, one surmises, is acquired from the senior Gallio, Marcellus's father. Marcellus is haunted by guilt over having played a key role in the execution of Jesus, who he knows to be innocent of any real crime. He wins Jesus's robe in the dice game at Calvary, and subsequently he is driven into mental illness, fearing that the Robe itself is the source of his depression and increasing detachment. Eventually it is the Robe itself that seems to release him from this condition. Throughout his struggle, Demetrius encourages him, while he himself struggles internally with the strange effect of the executed Jew on his own mind and heart.

The story unfolds with Demetrius and Marcellus both attempting to satisfy their curiosity about the man put to death at Calvary. Douglas's narrative is leisurely, and filled with interesting and plausible encounters with characters that show up in the gospels and the Book of Acts (Stephen, Paul, Peter). The author also reveals intriguing dynamics of ancient Roman political realities and the Empire's geography. Indeed, one of the most attractive aspects of the hard-back edition I read many years ago was the map printed on the book cover inside of the Mediterranean world at the time, indicating the various places that provide settings for the story. Unfortunately, that map is not a part of the paperback edition that I am using for this review.

There is not one but two lines of romantic relations in the novel's storyline, one involving Marcellus and the young woman (and eventual wife) Diana, the other focused on Demetrius and an Athenian woman named Theodosia. The tale of Marcellus and Diana is resolved, as both are sentenced to death by the insane young Emperor Caligula ("little boots") for their seditious acceptance of Christ and identity with a growing Christian community. Demetrius, at the end of the story, has departed to carry on work in Athens, and we can only speculate as to how it all turns out with Theodosia. I supposed it could have been the basis for a sequel, but Douglas did not write one. Film-makers, however, attempted a sequel with the awful movie "Demetrius and the Gladiators."

While Douglas's novel does not deny the "supernatural" and miraculous elements in the story of Jesus, he does suggest that at least some of the miracle stories might have had a quite natural interpretation (e.g. the wedding at Cana and the feeding of the multitudes). Also, his depiction of Jesus moves in the direction of a humanistic teacher of universal brotherhood, peace, etc. -the well-known "great moral teacher" that resides in popular but theologically ignorant imagination. This led to criticism of the novel at the time of its first appearance. Yet, reading it today reveals a pretty strong recognition that there was something extraordinary, defying nature alone, in the story of Jesus and that he was, indeed, a person of singular transcendence, indeed the Son of God.

Reading the novel evokes inevitable comparisons with the film version, the first film ever made in the Cinemascope process (1953). One will find that the film captures the spirit of the book, while at the same time altering plot and narrative in the obvious interests and necessities of time and dramatic presentation. If you are familiar with the movie, you'll recognize certain events and key moments, although the context is different and the details more nuanced. Andrew Greeley's introduction is a strong testimony of the power of vivid fiction and accomplished narrative to inspire and give focus to life. For Christian believers who enjoy literature, this is a good addition to any personal library.

An Additional Comment by Derrel Emmerson: I read this book circa 1951. My uncle brought good books into our house and gave me permission to read them. This book was very influential in firing imaginative reading of the Bible. Another two about that time were Quo Vadis, and The Silver Chalice. I am not sure at this point without searching who wrote them, but they were picked up by the film industry which further enhanced my interests.